Olga earned her bachelor’s degree from the prestigious Institute of Culture in Cheliabinsk,Russia. She studied choreography, ballet, jazz and folk dancing in addition to ballroom dancing.  After finishing college, Olga moved to Moscow and joined Stanislov Popov’s dance club. At the time Stanislov and Ludmila Popov were the many time USSR 10 dance champions. She began competing professionally in Moscow and became a finalist in both the standard and latin divisions. Olga and her partner represented the USSR in dance competitions in Germany, France and England. After 4 years in Moscow, Olga had an opportunity to move to the United States in 1992.

David Hamilton, US Smooth division champion, invited Olga to dance with him in 1996 and the American Smooth style was changed forever!  Twice Olga and David were the US representatives to the World Showdance Competition in Baden Baden, Germany (1997 and 1998). Olga and David have appeared many times on the national PBS Show, “Championship Ballroom Dancing.” Olga and David were invited to dance in the World Cup Ballroom event in the Kremlin Palace organized by Stanilav Popov. This event was televised by NTV+ – one of the most popular Russian TV channels with a viewership of approximately 100,000,000 in Russia as well as Europe and the United States.

Olga is featured along with Chris Morris, David Hamilton and others in various instructional ballroom videotapes and Karioke CD’s. Several times she has been a featured front cover model in Wayne Eng’s “Dance Vision”. She, along with David Hamilton, was honored in 2001 to be chosen along with other world class ballroom dancers for the cover of a new CD “The Essential Waltzes” published in London, England.

Currently, Olga is a national and international judge and coach. She has established “Designs by Olga” and is a recognized leader in the creation of many different kinds of dance fashion.  Olga feels particularly proud of having established The New Star’s SportDance Club for Young People.

Most recently Olga was honored by the Connor Bishop Zion Foundation (Connor was part of Olga’s New Stars Dancesport Club. The Foundation is his legacy). Olga received a “Special Achievements Award” for her continued contribution to developing youth dancers and, those with disabilities. Olga is certified in Autism Movement Therapy. 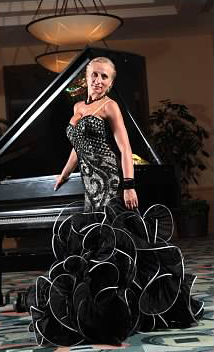